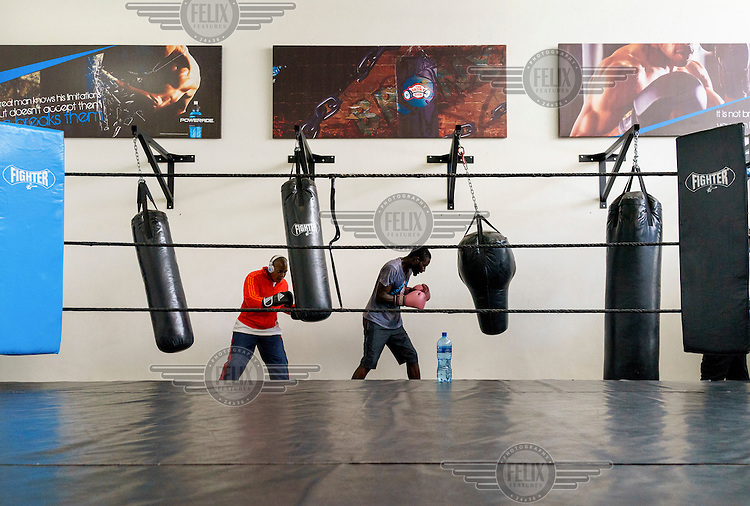 Julie Tshabalala (left), South African Womens welterweight and middleweight champion, won her first championship while under the tutelage of George Khosi at the Hillbrow Boxing Club in Johannesburg, South Africa. She says that promoters tend to focus on mens' boxing, and that it's harder for women to find sponsors.
Hillbrow, in downtown Johannesburg, is the city's most notorious neighbourhood. It is overcrowded, ridden with illegal squats and suffers from high levels of crime much of which is related the thriving illicit drug trade. Against this backdrop, George Khosi's story is not atypical. A childhood spent on the streets, where he survived by committing petty crime and hustling, led to imprisonment at the age of 16. Because he was big and looked older than his age this incarceration was in an adult institution. Here he began to fight since, as he says 'they wanted to make me a woman and I didn't want to be a woman.' When he got out, he took up boxing in earnest. His prospects as a professional boxer looked bright until he was shot and left for dead during a burglary. He lost his right eye and now walks with a limp. His boxing career seemed over but George picked up his gloves again, this time to teach Hillbrow's youngsters. His gym became a place of hope and discipline for local youth, keeping them of the streets and even producing some national champions.
Nyani Quarmyne/SGIA/Panos Pictures /Felix Features 26 Feb 2015