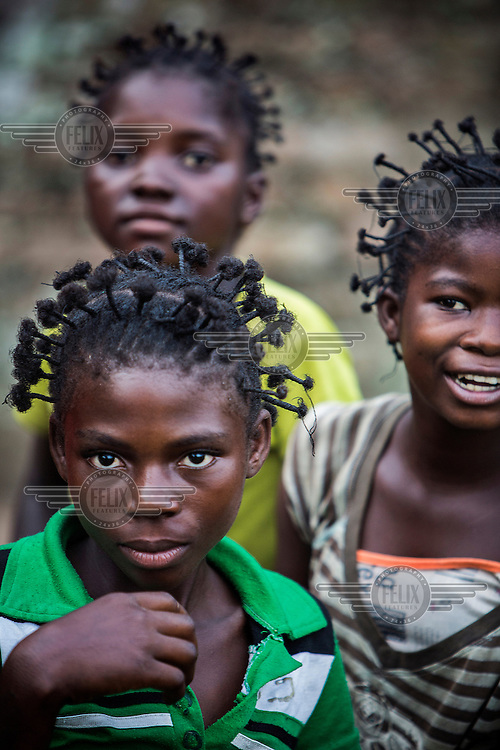 Three children all sporting a distinctive hair style. Doctor Richard Hardi and his medical medical team have come to the remote village of Pania to perform eye surgery.

From his base in Mbuji Mayi Hungarian ophthalmologist Friar Richard Hardi and his team travelled deep into the Congolese rainforest, by 4x4 and canoe, to treat people in isolated communities most of whom have never seen an ophthalmologist. At a small village called Pania they established a temporary field hospital and over the next three days made hundreds of consultations. Although both conditions are preventable, many of the patients they saw had Glaucoma or River Blindness (onchocerciasis) that had permanently damaged their eyesight. However, patients with cataracts, a clouding of the eye's lens, who were suitable for treatment were booked for an operation. For two days the team carried out the ten minute procedure on one patient after another. The surgery involves making a 2.2mm incision into the remove the damaged lens that is then replaced by an artificial one. Doctor Hardi is one of the few people willing to make such a journey but is inspired to do so by his faith and, as he says: 'Here I feel that I can really make a difference in people's lives'. /Felix Features
Dieter Telemans/Panos Pictures /Felix Features 24 Feb 2013
Not for sale in France and The Netherlands.