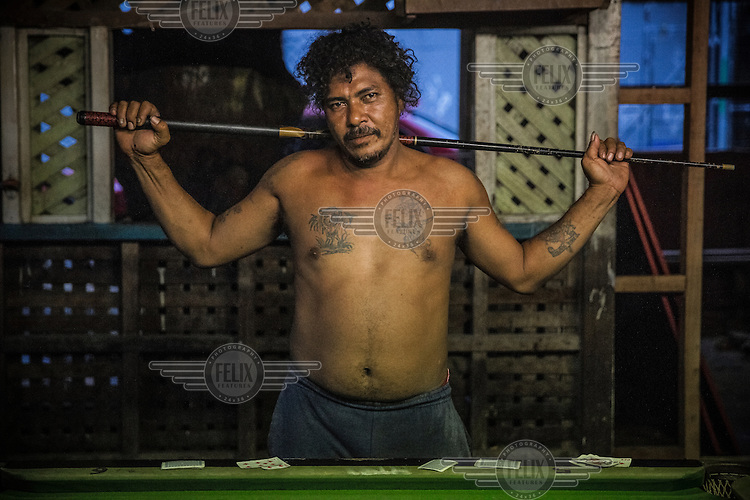 Thomas 'Master' Mahu, 45, plays pool in a pub in Lord Howe Settlement. He says: 'I came to Honiara in 1998 from my home island of Pelau on Ontong Java to look for a job. Now I work as a builder in a construction company. Before, on Ontong Java, life was better than here in Honiara. We had plenty of food, but then climate change started to affect our island. The sea spoiled our gardens, salt water comes from the bottom and destroyed our taro crops. When this started happening, many of us started to leave the atoll. Decades ago, we were coming to Honiara just to work for food and pay basic services, we could't make enough money to support our families back home. Now our kids are getting better educations here, we are getting better jobs and salaries here. We getting accustomed to the urban life style. Now more people moving out of the atoll than before. Its not only about getting a better job anymore. Climate change, food shortage and education are the main factors.'
Lord Howe Settlement, a district of the capital Honaria, is populated by people from Ontong Java Atoll (AKA Lord Howe Atoll), a Polynesian outlier of the Solomon Islands. Its people have been moving to Lord Howe Settlement in search of a better life since the 1970s. Climate change leading to rising sea levels and consequent food insecurity now means the atoll is existentially threatened. The remaining Ontong Javanese people are considering the possibility of complete relocation to Santa Isabel Island and to Honiara. However, with Lord Howe Settlement itself suffering the consequences of extreme weather and overcrowding, community leaders believe it is not a viable long term home. Furthermore, they fear that the Ontong Javanese people's Polynesian identity will be lost as a new generation is brought up in a location with no connection to ancestral land. Their identity will be weakened as they become a minority amongst Melanesian communities that have vastly different traditions and speak different language
Vlad Sokhin/Panos Pictures /Felix Features 17 Feb 2016
Not for sale in Germany and German speaking countries, France and French speaking countries and Russia.