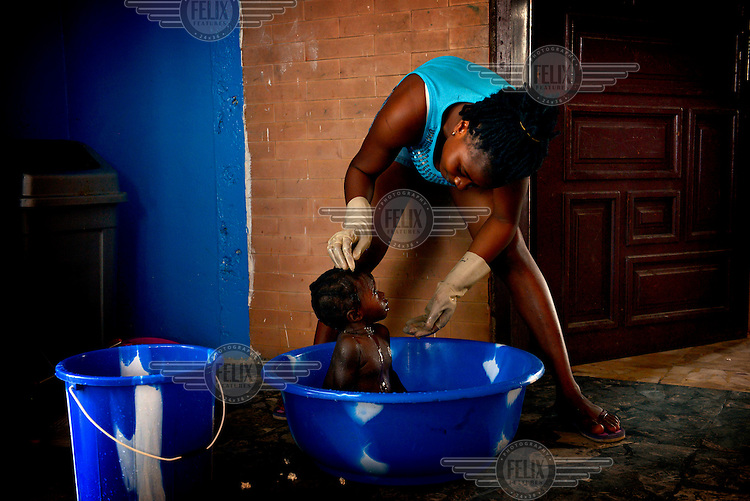 A caretaker at the ICC (interim care centre) cools down Mary who has a high fever, while waiting for an ambulance to transfer the 15 month old girl to the Ebola Treatment Unit. The caretakers are all Ebola survivors who are said to be immune from the virus.
Phoebe (6) and Mary (15 months) are two girls from Taylor Town in Bomi County who grew up together. Phoebe's brother was living in Monrovia and became infected with Ebola. His father evaded the quarantine and brought him back to Taylor Town. Soon after they came back his condition deteriorated but his father told people that his son had a 'leopard problem', a traditional belief that people can be possessed by spirits. When the young man eventually died his body was kept in the community for three days and then buried in the local cemetery. Soon after, a number of people became sick and were admitted to an Ebola Treatment Unit (ETU) in Bong where they tested positive for Ebola. Taylor Town was immediately quarantined, the local market closed and all people prevented from entering or leaving the town.

Save the Children heard about Phoebe and Mary and the fact that they had tested negative and had nowhere to go since their next of kin were either quarantined or in the ETU. The two girls were picked up and taken to an Interim Care Centre (ICC) in Monrovia. Mary tested positive for Ebola and was treated. She recovered and was able to return to Taylor Town. Phoebe was negative but had to stay in the ICC for the 21 day incubation period. In all, 16 people died from the Taylor Town outbreak, including Phoebe's mother. The young man's father survived despite being infected with Ebola but is now scared to go back to Taylor Town because people there blame him for the outbreak.
Chris de Bode / Panos Pictures /Felix Features 15 Nov 2014
Not available in the Netherlands and Germany.