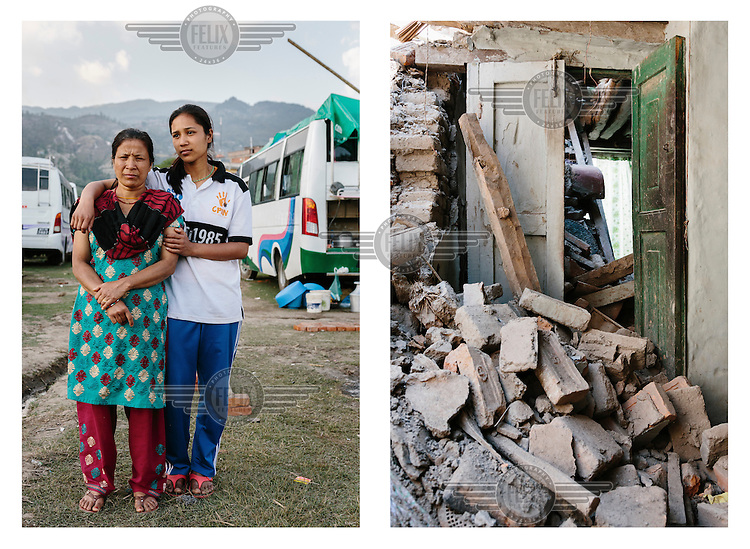 Left: Rama Manandhar stands with her daughter outside the bus they have taken shelter in following the earthquake that struck Nepal on April 25th. Approximately 70 people are staying in six buses. Rama Manandhar is a teacher at the nearby school. 'I plan to go back to work as soon as the school opens.' Rama Manandhar's oldest daughter Roshana is studying for a graduate degree. 'How can I tell her not to study, to go to work?' - 'Every night I think about how I'm going to accommodate my two young daughters who are growing up now. And my nine year old son. If it was me alone I could've gone anywhere, to stay with my relatives, but we're a family of five. I am happy to be with my family, and to take care of them, not alone.' The family's home was located in the old bazaar district of Sankhu, Nepal, in which 980 houses collapsed and almost 90% of buildings have been left damaged.'It's been so difficult here. The people who died they are gone now, but people who are living here like us, it's a living hell to live like this.' - 'Sometimes we think even though the walls of our house are cracked we should go back there, but we heard that others who'd gone to retrieve their belongings got buried when the structure collapsed. So we are being very careful.' - 'Maybe somebody could help provide us with something temporary that isn't a tent?'

Right: The building in which Roshana Manandhar (20) and her family lived stands in ruins in the old bazaar district of Sankhu, Nepal, in which 980 houses collapsed and almost 90% of buildings have been left damaged.
Aubrey Wade/Oxfam/Panos Pictures /Felix Features 14 May 2015