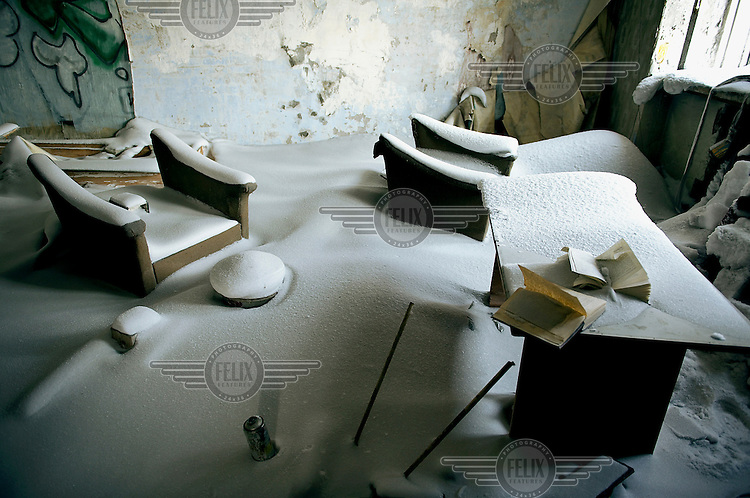 The interior of an abaondoned multi storey building in Norilsk covered in snow with pieces of abandoned furniture.
The city is facing an infrastructural crisis since most of the buildings were built on pylons driven into permafrost. As the top layer of permafrost has started to melt many buildings have become unstable. The thaw has been caused by the leeching of sewage and hot water into the ground, urban development in general, global warming and pollution.
The city of Norilsk, in the far north of Russia's Krasnoyarsk region, was founded in the 1920s and today has a population of just over 175,000. In its early years it served as the centre of Norillag (or the Norilsk Corrective Labour Camp) but was given town status in 1953 as the Gulag system was slowly winding down. Today the city is largely dependent on MMC Norilsk Nickel, the world's leading producer of Nickel and palladium and Norilsk's main employer. In 2001, the city was closed to all non-Russians, except for citizens of Belarus.
Elena Chernyshova / Panos Pictures /Felix Features 23 Mar 2012