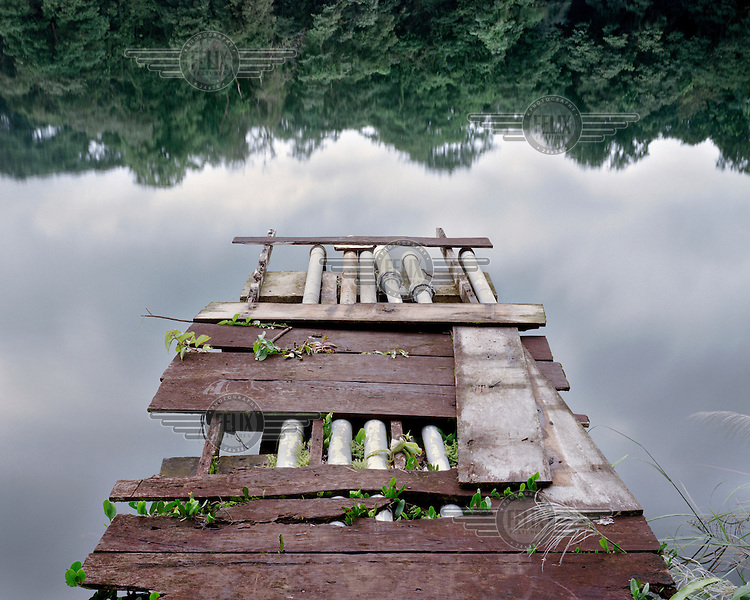 Drainage pipes flowing into Gatun Lake at the Hotel Melia Panama Canal, in Espinar, were the former U.S. Military Base Fort Gulick was located. The Hotel uses the grounds and building of the former School of the Americas the infamous US military covert operations training facility.

The Panama Canal Zone is an area extending 8kms out, in each direction, from the waterway's central line, was a territory controlled by the United States between 1903 and 1979. After a 20 year period of joint administration, the Canal came under the full control of Panama in 1999. The Canal opened to shipping in 1914 and during its tenure was of great strategic importance to the US, enabling it to rapidly move its naval fleet between the Atlantic and Pacific Oceans. However, its economic value came not directly from shipping fees but from the stimulus to trade that the waterway created. One hundred years after it opened in 2014 it is due to have its locks upgraded to cater for the super sized container ships of the 21st Century.
During the era of American administration thousands of US citizens populated the Canal Zone, living and working under US law in towns built to American standards. Not all of these people returned north after the canal came under full Panamanian control many stayed on, their identities tied to the region.
Matias Costa/Panos Pictures /Felix Features 19 Aug 2013
Not for sale in Spain