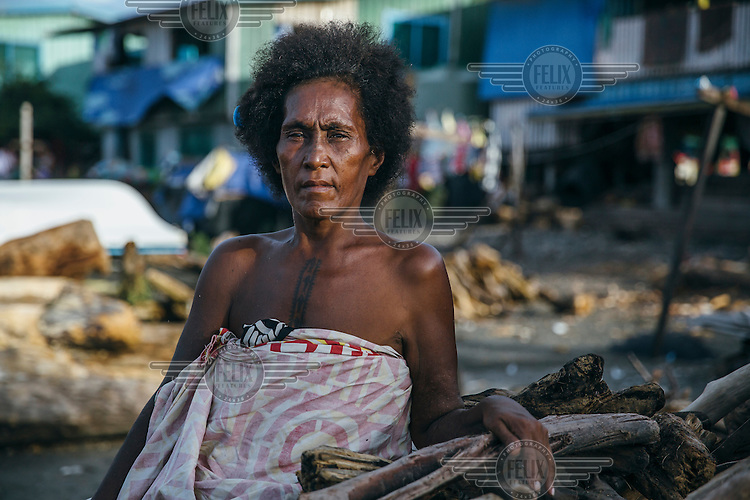 Margaret Kesivi, 51, is from Luaniua Island on Ontong Java Atoll. She and her husband moved to Lord Howe Settlement in 1983.
She says: In the 80s we had a lot of food on Ongoing Java, it was never scarce. Nowadays every time when we go back there to visit our relatives we bring food with us: rice, flour, biscuits...
The only good thing on the atoll is fish. But the crops are not growing well there anymore. The sea water destroys the plants. People from my generation could live there growing own food, the new generation can't do it, it's not enough for everyone. Lord Howe Settlement, a district of the capital Honaria, is populated by people from Ontong Java Atoll (AKA Lord Howe Atoll), a Polynesian outlier of the Solomon Islands. Its people have been moving to Lord Howe Settlement in search of a better life since the 1970s. Climate change leading to rising sea levels and consequent food insecurity now means the atoll is existentially threatened. The remaining Ontong Javanese people are considering the possibility of complete relocation to Santa Isabel Island and to Honiara. However, with Lord Howe Settlement itself suffering the consequences of extreme weather and overcrowding, community leaders believe it is not a viable long term home. Furthermore, they fear that the Ontong Javanese people's Polynesian identity will be lost as a new generation is brought up in a location with no connection to ancestral land. Their identity will be weakened as they become a minority amongst Melanesian communities that have vastly different traditions and speak different languages.
Vlad Sokhin/Panos Pictures /Felix Features 22 Feb 2016
Not for sale in Germany and German speaking countries, France and French speaking countries and Russia.