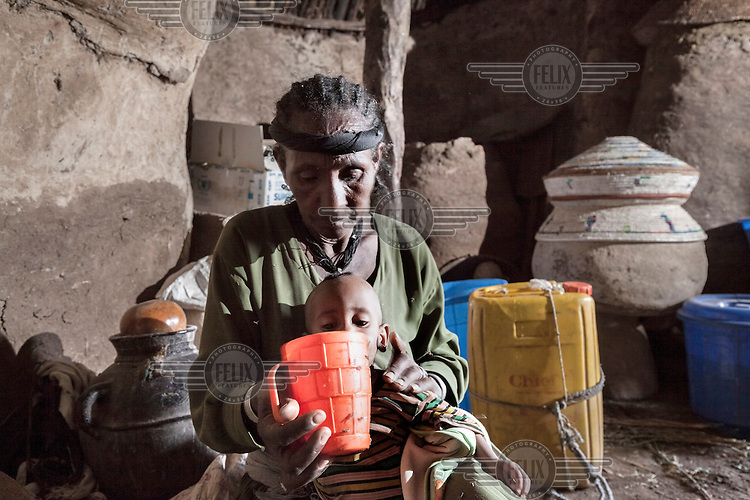 Thnat Aalemum, 45, with her grandchild who was found to be suffering from malnutrition caused by the drought. She says: 'The medical experts nearby weighed my nine month old grandchild. She is malnourished...I am worried. I am not strong enough to provide for my children anymore as there just isn't enough food to eat. If I get any weaker I won't be able to support them.'
At least 10 million people in Ethiopia now require food assistance because of a second year of failed rains.
Thnat is one of many seeking support at a food distribution centre. The centre helps families, whose crops have been destroyed by El Nino, with drought resistant seeds and emergency aid.
Thnat goes on: 'Although we get food and milk from the government through the safety net programme, the drought has made things worse. I am also on something called an emergency programme since November last year. My biggest fear is that if this drought gets worse my granddaughter will not get better and my other children will have to drop out of school altogether. I know in some of the worst affected areas children have dropped out of school completely. If the drought remains they will probably never go back and they will have to work instead.'
Petterik Wiggers/Panos Pictures /Felix Features /Felix Features 18 May 2016
Not available in the Netherlands