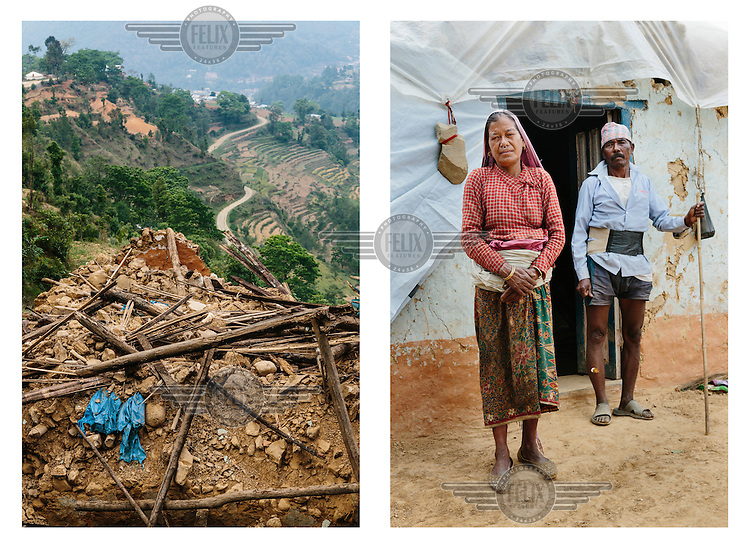 Right: Thulimaya Tamang and Birdeu Marpa (62) stand outside the partially destroyed house they've taken shelter in since an earthquake struck Nepal on April 25th 2015. By stretching several pieces of tarpaulin over the remaining walls they have been able to create a temporary shelter. 'My husband and I were inside sleeping when the earthquake struck. Everything around us collapsed so quickly. My husband was buried alive, up to his neck. It was terrifying. I called for help and we managed to pull him out to safety. Then he fainted.' - 'I don't know how to put my feelings into words. Sometimes I still feel as if everything is shaking. He was in hospital for three days and came home confused, incoherent, not wanting to eat. I didn't know what to do. Only yesterday did he start talking again. He can't walk well and still has a lot of pain in his back.' - 'Our goats and buffalo are safe. I'm so happy. Their house didn't fall down, so they were unharmed. I don't know what I would have done if we'd lost them too.' - 'I don't know how old I am. My parents died when I was young and I was orphaned so there was nobody to tell me. I have six children, two girls and four boys.' - 'It's been very difficult. We've taken our remaining things into a small shelter that my sons helped construct. Two of my sons, two daughters, my husband, and two daughters-in-law with their young children sleep here.' - 'My eldest son is away working in Malaysia. He says he can't come home now. He has no leave, so he will come next year only. I miss him so much, especially now. We speak on the phone and he says 'stay well, eat well, be careful.' - 'My youngest son ran away three days after the earthquake. I don't know where he's gone. He's 11 years old. If he was a girl I might never see her again, so many girls get trafficked, but he's a boy so I'm sure he will come home eventually. He called his sister and told her he'll be home for th
Aubrey Wade/Oxfam/Panos Pictures /Felix Features 14 May 2015