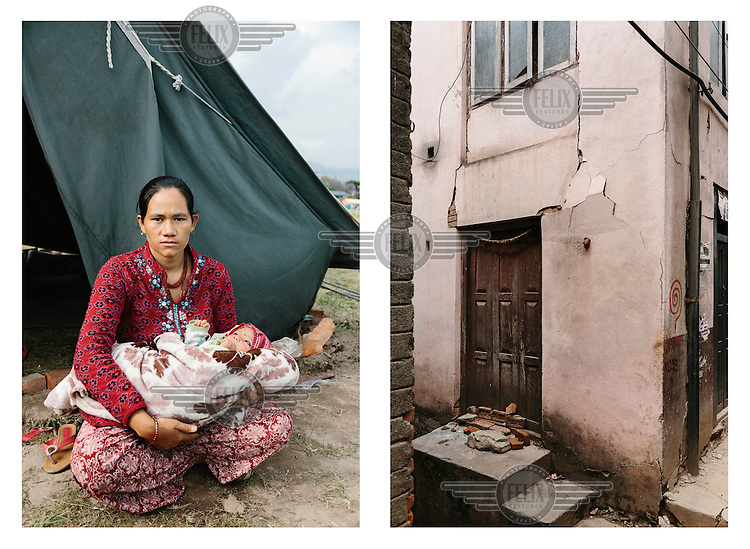 Left: Rama KC (23) holds her newborn son, Hari (45 days). They have taken shelter in a tent in Tundikhel Internally Displaced Persons (IDP) camp in Kathmandu, one of 16 sites in the city identified by the government in Nepal's emergency response plan for housing displaced people. Like most people in the camp Rama rented accommodation in a building left structurally damaged by the earthquake. 'I was having lunch in the kitchen when the earthquake struck. Hari was asleep in his cot in another room. I ran to him immediately. He was rolling around in his cot, which was shaking violently. I thought he would die.'
Oxfam has installed a T11 water tank, which has a capacity of 11,000 litres of clean water, and latrines in the camp.

Right: Visible cracks in the brick and plaster work of this apartment building indicate the type of structural damage suffered by thousands of buildings across Kathmandu. With frequent and powerful aftershocks occurring regularly in the first week after the earthquake many thousands of residents are too afraid to return to sleep in damaged buildings, fearing they could collapse.
Aubrey Wade/Oxfam/Panos Pictures /Felix Features 14 May 2015