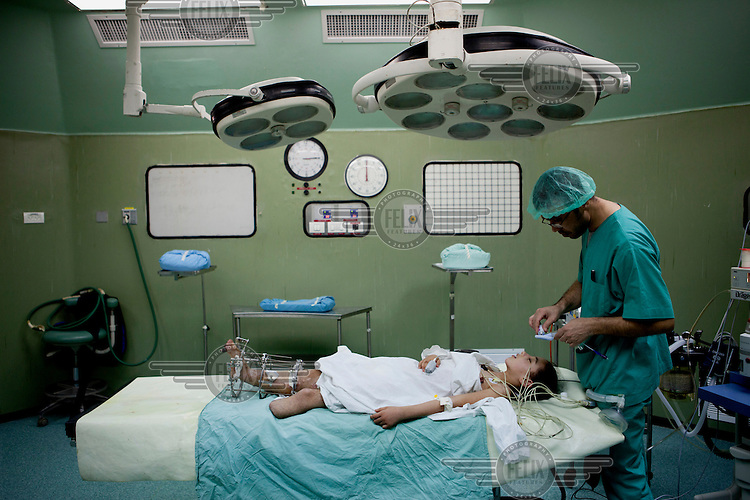 Weam Al Astal, a nine year old from Khan Younes, undergoes surgery after she received serious injuries during the summer 2014 Israeli military operation ('Pillar of Defense') in the Gaza Strip. The Israeli operation lasted 51 days and resulted in 2,145 deaths and 11,231 injuries among the Palestinian population. The vast majority of the serious casualties have complex orthopaedic injuries that the Palestinian Ministry of Health is ill-equiped to manage. DFID/UK Aid is funding NHS Doctors, deployed through the UK's Rapid Response Facility's funding, to work alongside Medical Aid for Palestinians (MAP) in providing post conflict surgery at Gaza's Shifa Hospital. The NHS doctors (through the charity Ideals) volunteer to visit Gaza in their spare time and work alongside their Palestinian colleagues.

Weam's mother says: 'She was sitting with her father and playing with her other cousins in the garden of their small home when a rocket hit them directly. She lost one leg. Four of her cousin's, all girls, were injured too, and her father he also lost a leg. Weam's injury is the worst. They were targeting children, they could see that there were children playing there.'
Abbie Trayler-Smith/DFID/Panos Pictures /Felix Features 16 Dec 2014