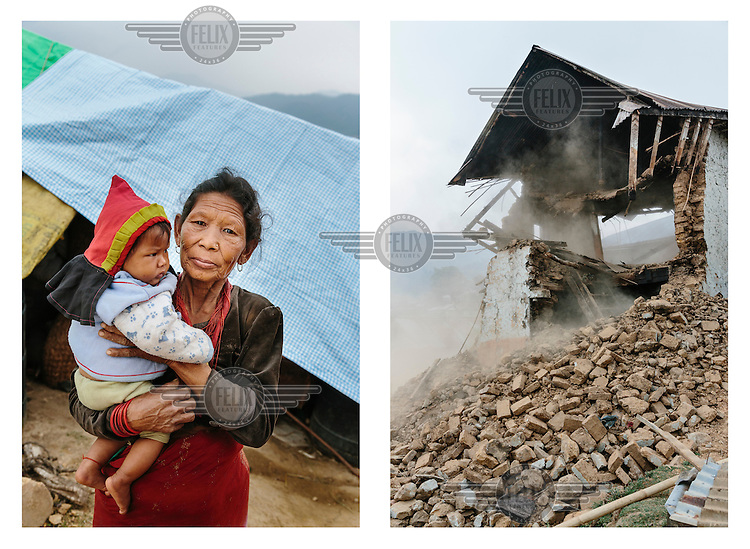 Left: Kanchi Yonjan (60) holds her granddaughter Senchumaya (7 months old) in her arms outside the hastily constructed tarpaulin shelter she shares with 17 others following the partial collapse of her home during the earthquake that struck Nepal on April 25th 2015. 'My house was the oldest house amongst all the others in the village. Many years ago there was a big fire in the village and my house was undamaged. My grandparents built it, a long time ago. It was so strong. People used to build them stronger in the old days. But now we have to completely pull it down.' - 'My husband was at home carrying my granddaughter like I am now when the earthquake came. I was working in the fields. I was very worried for them because he is old like me. They escaped out of the window.' - 'We will have to rebuild but we have to wait until after the monsoon ends. We will spend the monsoon season in a tent.' - 'We had toilets in our houses before, now we have to go outside. We go to the river to bathe. We worry about disease because the children just go on the side of the road now and we cook outside on open ground.' - 'I'm not sure how old I am but I was born in the year of an earthquake. My mother used to tell us stories about the last big one (1934) but I wasn't born for that one.'

Right: Dust settles after villagers attempt to demolish the supporting walls of Kanchi Yonjan's house in Chhampi, Nepal, and collapse the roof. They are attempting to reclaim the aluminium roof sheets in order to build a more sturdy temporary shelter than the tarpaulin the family presently shelters under.
Aubrey Wade/Oxfam/Panos Pictures /Felix Features 14 May 2015