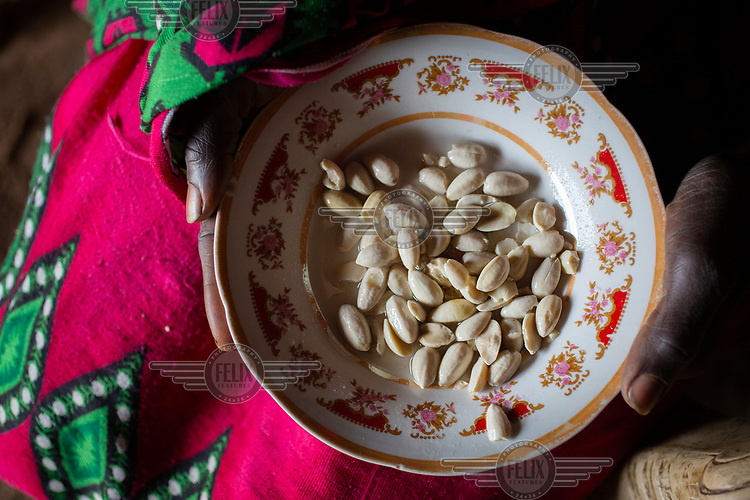 Agol Agnot (25) and her husband, Ariath (24) eating peanuts with grandmother, Achol Akech (60), at their home in Majook village. The couple have three children Amin (7), Deng (5) and Nyigeng (2 ½) who is being treated for malnourishment.

Agol and her husband both grew up in the village however, in 2007 they had to flee because of conflict. They returned in 2016 and made a small house (tukel) for themselves and their family to live in. ''I was happy to come home. Our motherland is our motherland. We are happy'', says Agol. Four times a month, Agol and her family are able to eat two meals a day. The rest of the time, they only eat once, and this meal consists of pumpkin leaf and dried fish, which they buy from the market. To earn an income, Agol works as a casual labourer cultivating other people's farms. However, she can only do this when it is raining (because the soil needs to be damp), and is paid 400 SSP per day (around GBP 2.40). Her husband, Ariath, who went to school, makes charcoal in the dry season, for which he receives around 800 SSP (GBP 4.80) for a week's labour
Abbie Trayler-Smith/Panos Pictures 5 Jun 2019