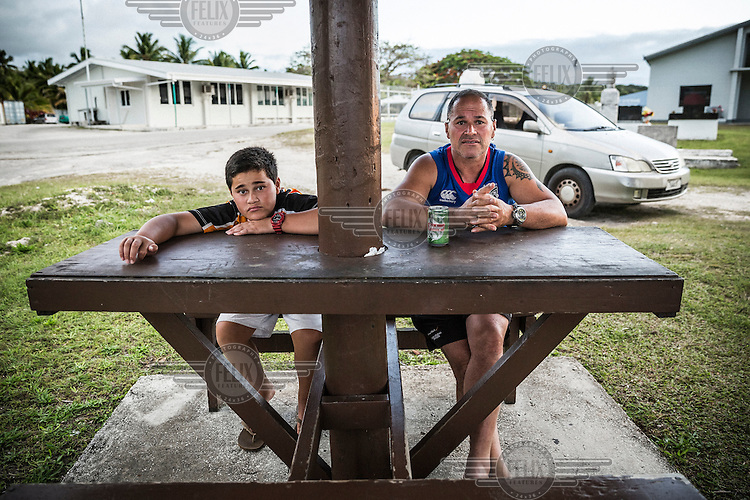 A father and son take a break at a picnic area of Alofi, the capital of Niue. Both are originally from Niue but now live in New Zealand and visit their home county only once or twice a year.
The tiny island of Niue in the South Pacific, also known as the 'Rock of Polynesia', is one of the most remote places in the world, only accessible by private yacht or by plane on a three and a half hour flight from Auckland which flies once or twice a week. It is part of the 'Area of the Realm of New Zealand' and all Niueans have New Zealand citizenship. Due to lack of opportunities on the island and high unemployment about 90 - 95% of the population, or 20,000 people, now live in New Zealand. The population now stands at less than 1,500, making it one of the least populous countries in the world. In an attempt to bolster the population, the Niue government has invited immigrants from neighbouring Tuvalu, which is facing problems due to climate change related rises in Ocean levels, to come and settle on Niue. At the beginning of the century, around 100 Tuvaluans settled in Niue.
Vlad Sokhin / Panos Pictures /Felix Features 11 Dec 2014
Not for sale in Germany and German speaking countries, France and French speaking countries and Russia.