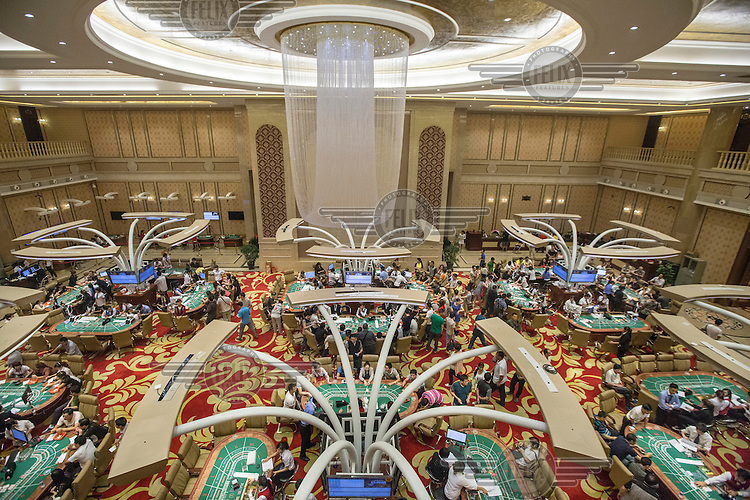 The interior of the Galaxyse casino which was built on the site of a former rice paddy on the outskirts of Mong La. A steady stream of taxis and people-carriers ferry customers at all hours to the casinos which are full of Chinese gamblers, including people playing remotely through surrogates with high-speed internet connections. Chinese authorities tend to turn a blind eye to this jungle sanctum, but in 2003, a large contingent of Chinese soldiers marched across the border and shut down five Chinese-run casinos. The daughter of a high-ranking Chinese government official sparked the incursion after she lost 1.4 million yuan ($168,674) at Mong La's gambling tables, according to Asia Times Online.
The town of Mong La on the Burma - China border in western Burma (Myanmar) is technically in Burma but relies on most infrastructure - electricity, telecommunications - on neighbouring China. The main currency used here is the Chinese yuan. The town is in the middle of the so-called "Golden Triangle" and specialises in gambling and the sale of poached and endangered species. Tiger skins, rhino horns, pangolins and other creatures are freely traded here and many are available to eat. Prostitution is rife and just outside the town a bear farm keeps between 500 and 600 bears which are kept in captivity for their bile which is harvested for medicinal use.
Minzayar Oo / Panos Pictures /Felix Features 15 Oct 2014