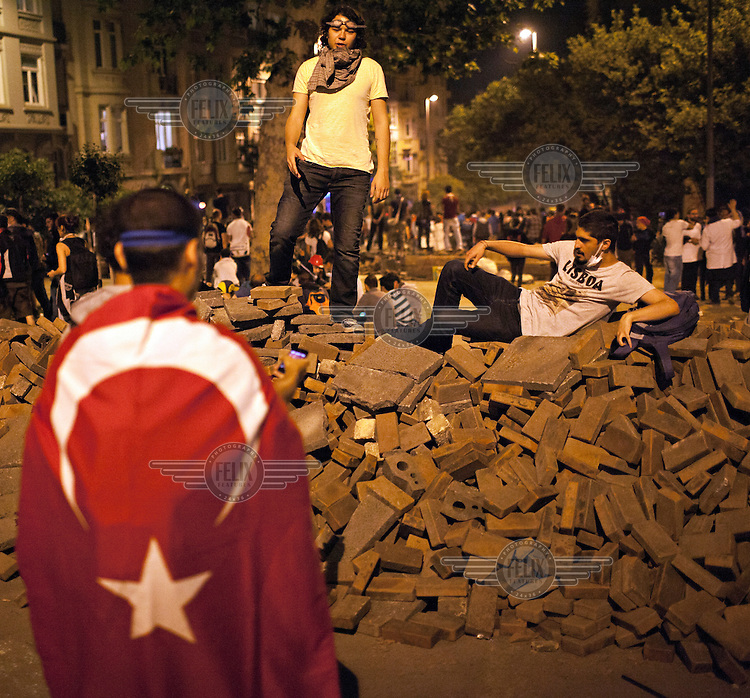 Protesters rest on a barricade made out of bricks and detritus while another stands nearby, wrapped in a Turkish flag, during a protest near Taksim Square in Istanbul.


Protests against the government of Recep Tayyip Erdogan spread across Turkey after a peaceful sit in organised by environmental activists in Gezi Park were violently broken up by the police, causing numerous injuries. The park has been slated for redevelopment and is to be turned into a shopping complex with a mosque and a replica of a former army barracks. On 4 June 2013, after two deaths amongst the protesters had been confirmed, the Turkish Deputy Prime Minister Bulent Arinc apologised to protesters for death and injury caused. On 11 June 2013 police moved in to clear the protesters' camp from the square and park and battles ensued with police firing teargas and being pelted with stones. Erdogan's AK Party has been in power for over a decade and many accuse the Prime Minister of becoming increasingly authoritarian, eroding public liberties and imposing Islamic values. Protesters have vowed to continue their activities. 
Aytunc Akad/Panos Pictures /Felix Features 3 Jun 2013