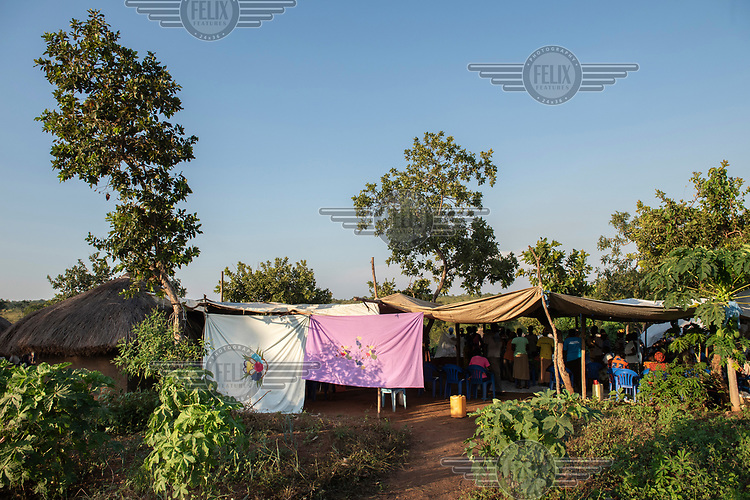 Lily Ipayi, 39 died the the morning (1am) of October 5th 2018 after suffering of HIV/Aids for 11 years. Lying on the by her sewn milayas (bedsheets) her friends and family gathered at her husbands plot in Bidibidi Refugee Settlement to grief and say goodbye.

Her husband Desmond Dongo (+256 782 878 130) (blue shirt and no Bible) is the only man dancing among the many grieving women around the bed where Lily is lying under a mosquito net and decorated with many flowers. Yesterday she was at the hospital in Koboko when she became worse and the doctors couldn’t help her but called hur husband Desmond who took her home to Bidibidi. Here she passed away last night. Now friends, neighbors and family are singing and dancing for her and waiting for her coffin which is brought here from Mojo. Two of her children come crying and are passing out because of the chock and prayers are made in both Bari and Arabic so all 200 attendees can understand the last words said to Opani.

The elder brother of husband Desmond Dongo is talking about Lily’s life during the ceremony. Lily was born in 1975 and is from Morobo in South Sudan. Lily and Desmond got married in 1994. She and her family came to Bidibidi in September 1st 2016.
She gave birth to three children; one born in 1994, another one who passed away in 1999 and the third one was born but passed away shortly after. The sickness (HIV & Aids) started in 2008. In may this year they had to bring her to hospital in Arua but since she has blood group AB they couldn’t find her a blood transfusion and choose to leave back to Bidibidi even though she still regularly went to the hospital in Koboko for medicin and check ups. The fact that the doctors had failed to find a blood transfusion made the family feel that she should at least be at home.