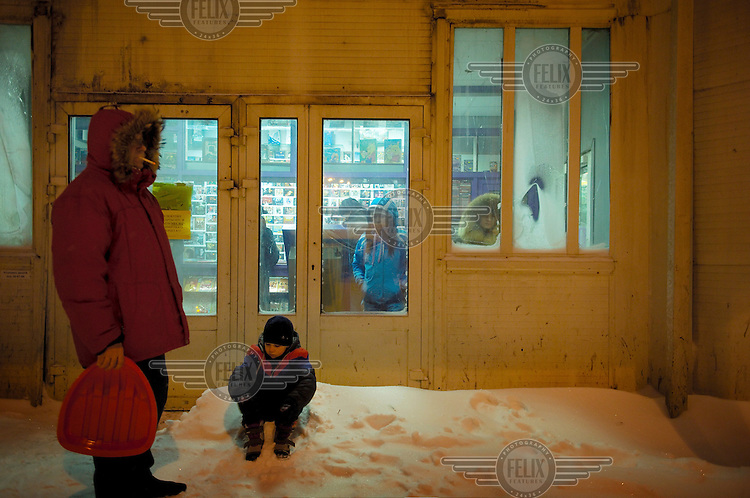 A man and a child wait for a bus outside a small grocery shop in Norilsk. A girl and a woman are waiting inside. Many shops double up as warm bus shelters in Norilsk where temperatures average -30C in the winter.
The city is covered in snow for around 8 to 9 months a year. Each year around 10 tonnes of snow fall on the city for each inhabitant.
The city is one of the coldest in the world with winter temperatures averaging -30C. Around 280 days of the year have freezing temperatures with snowstorms on an average of 130 days a year.
The city of Norilsk, in the far north of Russia's Krasnoyarsk region, was founded in the 1920s and today has a population of just over 175,000. In its early years it served as the centre of Norillag (or the Norilsk Corrective Labour Camp) but was given town status in 1953 as the Gulag system was slowly winding down. Today the city is largely dependent on MMC Norilsk Nickel, the world's leading producer of Nickel and palladium and Norilsk's main employer. In 2001, the city was closed to all non-Russians, except for citizens of Belarus.
Elena Chernyshova / Panos Pictures /Felix Features 2 Feb 2013